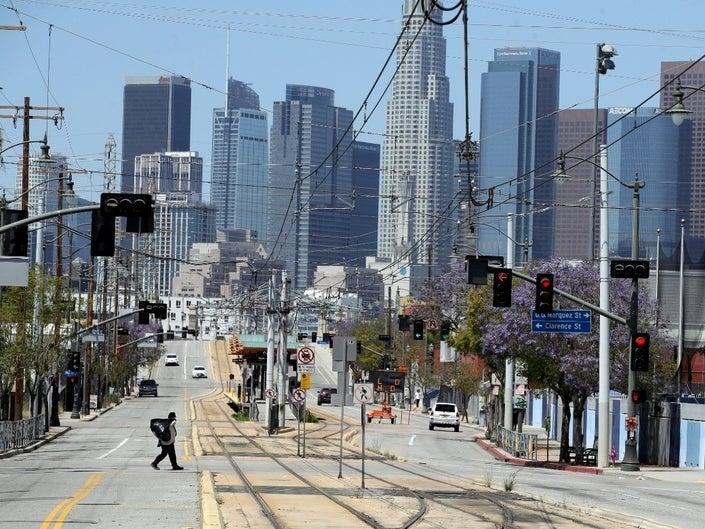 AP Photo/Marcio Jose Sanchez (A man crosses the street on an usually busy thoroughfare on First Street amid the COVID-19 pandemic Tuesday, May 5, 2020, in Los Angeles.)

The spike comes as California prepares to begin lifting restrictions. Los Angeles accounts for nearly half the state’s fatalities, and it remains unclear if local officials will lift restrictions when the rest of the state does. As of Tuesday, Los Angeles County has had 27,815 confirmed COVID-19 cases and 1,315 fatalities.

As Los Angeles grapples with pressure to reopen businesses safely, the worldwide scramble to find a vaccine or cure continues. Scientists at Los Alamos National Laboratory released a study showing that a new, mutated strain of the virus is now dominant worldwide, and it appears to be more contagious than the strain that first appeared in China, the Los Angeles Times reported Tuesday. The preliminary findings, yet to be vetted in the scientific community, could have profound implications on the search for a vaccine. It could also mean that someone infected with one strain could be infected again with the other strain, as is the case with various strains of the flu. As has been the case since the beginning of the outbreak, questions about the coronavirus often outnumber the answers.

The local outbreak continues to plague LA’s jails and nursing homes, and is a growing threat in the homeless community.

Barbara Ferrer, director of the county’s Department of Public Health, said the numbers mean that LA will continue to take a cautious, science-based approach to lifting shutdown orders. She added that the county will be releasing details soon on a “road map” for businesses, but it remained unclear if the county will be more restrictive than the state in terms of business restrictions.

“The county’s approach to reopening is guided by the science and by the current status of our pandemic locally. And we’re all looking forward to businesses reopening and getting back to work, and we all know we’re going to be on a slow journey together so we can continue to save lives and prevent overwhelming our health care system,” Ferrer said.

She again noted that the decision-making will depend on factors such as availability of hospital space and equipment, the availability of testing, the ability to trace contacts of those who test positive, and the continued impact of the virus on higher-risk populations. She noted that there will almost assuredly be more cases reported once businesses reopen, because more people will be “out and about,” but the county does not want to see a spike in the mortality rate, forcing the county “to have to go back and tell businesses to close again.”

“We have to do everything we can to be on a steady, slow path to recovery that makes sense for L.A. County,” she said.

She said planning for businesses to reopen will likely be in conjunction with Newsom’s anticipated guidelines, but she said she could not yet offer any specifics of what local retailers can expect.

“You’ve noticed how hard we’re all trying to be united across the state whenever it’s possible, so I think it’s in that spirit that we look at what the governor is doing, and we try to make sure that we can align as is appropriate given the unique circumstances here in the county,” she said. “But I do promise you and all the retail businesses, you will hear from us shortly about what is the plan for L.A. County as we work together, look at all the information and make sure that we can move in a way that’s safe or as safe as possible for everyone.”

Gov. Gavin Newsom on Monday announced that the state will be relaxing its stay-at-home order at the end of the week, allowing lower-risk retail businesses to reopen with limited operations, primarily restricted to curbside pickup.

Although the state will be issuing guidelines for such business reopenings, individual counties will still have the ability to maintain tighter restrictions depending on the virus’ local impact. Los Angeles County has been particularly hard hit, accounting for roughly half of the state’s cases and deaths, while housing only about a quarter of the overall population.

Of the 1,201 people who died for which ethnic data was available, 38% were Latinx, 28% were white, 19% Asian, 12% black and 1% Native Hawaiian/Pacific Islander. The numbers continued a trend showing a disproportionate impact of the virus on the black and Native Hawaiian communities in the county.

“When we present the information by percentages it often masks the fact that if we looked at actual mortality rates, our African-American and Native Hawaiian or Pacific Islander neighbors and families are dying at a much higher rate than all others in L.A. County,” Ferrer said.

Nearly half of the county’s COVID-19 deaths, 49%, have occurred in institutional settings, primarily skilled nursing facilities. Ferrer said there have been 647 deaths among residents of such facilities. At least one confirmed or suspected case was being investigated at 342 institutions as of midday Tuesday. Ferrer noted that investigations at 19 other facilities had been closed because no new cases at those locations have been reported in the past 14 days.

There have been 199 cases reported among the county’s homeless population, 109 of which involved people who were in shelters — the vast majority of them at the Union Rescue Mission on Skid Row in downtown Los Angeles.